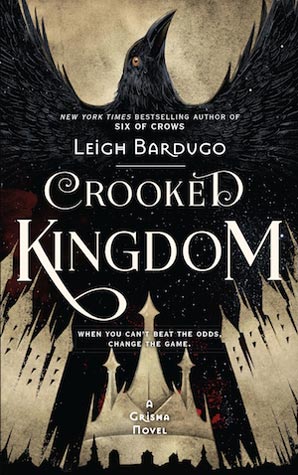 Kaz and his crew are just back from the heist, yet they are double-crossed and have to fight to get one of their own back and ultimately take revenge. As Jan van Eck is not honouring the deal he made with Brekker, the Crows are determined to take him out and destroy everything he worked for and tries to protect.

The revenge on van Eck though is not all they have on their minds as a war seems inevitable over what they brought back from the heist and everyone is interested in getting their hands on. Short on allies and resources it seems like everything and everyone is working against them.

The unlikely crew has to be on their best to see their plans through but with that many players and all out on the hunt for them, there is a great chance for things to go terribly wrong.

So I remember thinking after reading ‘Six of Crows’ that it was so good and everything that it could have worked as a standalone. And honestly I still think it does. But there is no way for me to describe how glad I am that there is another book following Kaz Brekker’s crew. I tried to make this spoiler free, otherwise this would not be so short (although it already is quite long for my standards).

I would have so regretted to not read this book just because everything was absolutely and genuinely perfect, from the first page through the last (which means, I also like the ending). Maybe also because Kaz is my favourite male character of all the books I read so far (and he will most likely not been dethroned in a very long time). I just can’t help myself, even though he is not what one considers to be a good person. He is scheming and stealing and trying to destroy other people’s lives (well, sure, they have wronged him, but to what lengths he goes to do this is kind of scary). In short, you should not have him as your enemy.

Which is what happens in the story and so he makes his planes to take them down. And I just love every single one of his plans and schemes because they just seem so realistic and very carefully planned, it’s truly beautiful to read. But although he tries to plan everything, sometimes even he is surprised (so yeah, he is not perfect) even though he will most likely find a way out of the situation with at least a little advantage on his side.

Anyway, all the other main characters in the book are great as well in my eyes. Well, they have been in the first already yet some of them weren’t as convincing for me in ‘Six of Crows’. But now, they get so much more depth to them, well written background stories which makes them come to life even more.

This is actually one of the things I love so much about the book as the characters history is revealed when the protagonist is in the middle of a situation that makes him or her remember the past. Even if it is just two or three pages, there are so well done and perfectly written that they were not in any way too much or interfering with the plot. On the contrary, they made it so much more thought trough.

Another aspect that I could not get enough of were the interactions between the characters as those made them grow as people but it also showed how skilled the author is. I love the funny lines, the deep conversations, and how those show the personalities and feelings of each of them. The writing in general is amazing, the description of the surroundings, the world and the atmosphere made me want to be in the same room or at the same place as the action. And as far as I can tell, not all of Ketterdam is a place you would want to find yourself to be in…

And of course, I adored the plot, I need more stories of this kind. It just made so much sense and the best part is, the reader never knows the whole story. Even the members of the crew don’t know all of it, just what they need to know. Sure, there are some things that one could guess but to be honest, I actually did not want to do this because I wanted to be amazed by the perfection of the resolution and outcome. More than once I was sitting there and thinking: ‘Nooooo, this is not happening. Please, Kaz thought about this and has a plan for this, plaese.’ And just before the last part (hmm, yet another aspect I love, that the book is divided into different parts and each one has a name) realisation dawned on me that I am starting the last pages of one of the best things I ever got to read.

So if there is one thing I kind of hate is that the book had to end. On the one hand I am happy that the end of the series was this amazing read as it somehow feels that the story of the Crows is told and more could end in disaster (forced story and so on). On the other hand I sincerely hope that one day, there is another story about Kaz (haha, yep, he truly is my favourite!) because I just need to know more and can’t let go just yet. I think there is much more to tell about the other characters as well, so I plead for more, I’ll take whatever I get!!

Finally, the book is filled with so many quotes and stories that deserve to be repeated and told and shouted out to the world but for me, there was one particular moment at the very beginning of the book. It is so random and has no deep meaning as maybe other passages but it stuck and after reading it, I just knew that I would adore this book.

“There’s coffee,” said the clerk when Retvenko entered the harbourmaster’s office, gesturing toward a copper urn in the corner.

I’m doing an imaginary curtsy for the author, her story and her writing! 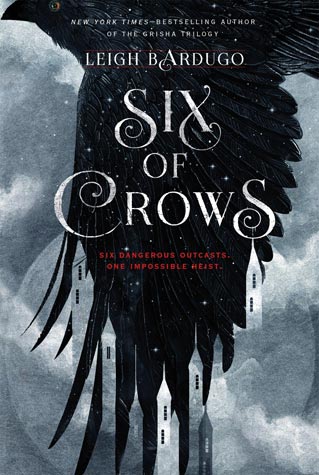 In Ketterdam, a large city on the island of Kerch, Kaz Bekker gets a job offer that will change his life and the life of his crew. Kaz, working his way up through the ranks of the Dregs since he was nine years old and at the age of 17 he now is the right hand of the gang boss with the nickname Dirtyhands fitting his reputation. When he is approached by a rich council merchant to break into and retrieve the object of desire from the impregnable fortress of Djerholm, the capital of Fjerda, he cannot pull the job of alone but needs the best crew he can find.

The persuasion for this job is far from easy as no one who attempted to steal from the Ice Court came back to talk about the adventure. Knowing this, Kaz negotiated 30 million kruge for the job and with a few tricks of his he gets the right people assembled for this heist that could end deadly.

With a sniper with a love for gambling, a sneaking spy with a troubled past, a determined Grisha surviving in an unwelcome place, an explosive expert with unlikely family ties and a condemned criminal with a hope for vengeance they try the most difficult heist Kaz has ever planned.

While accompanying them on their journey we get to know their pasts, why they agreed to take the job at all and why they take certain decisions and actions.

In each chapter we follow one of the protagonists from a third person point of view yet get insides in their state of mind, feelings and thoughts.

I heard a lot of things about this book, how good it is and that it kind of is a must read yet I had it on my bookshelf for over a month before I started reading. I read the Grisha-Trilogy and I liked it and it is written very well but I also felt a little disappointed so I feared that Six of Crows is going to be a similar experience. But how wrong I was! The book is just amazing.

I love the way it is written and the characters because no matter how good they are at what they do best, there is still something human in them, they are not perfect, they make mistakes. When reading about their back stories I could not help but feel some kind of understanding for each character, they felt like real people because every story was thought through. I personally do not like characters that are just perfect in every way or are able to everything they try. Even if it is fantasy I want to find something that I can identify with in the characters and that is very hard to do when the person I read about has no faults at all.

Not only the protagonists but also the world is described beautifully and with a richness in detail so you get the idea of how everything looks like and can imagine the scenery in your own mind. And if you lose track of the setup of the world there are two gorgeous maps at the beginning of the book.

Apart from that, Leigh Bardugo did a brilliant job in weaving the story so it does not appear constructed. Sure there are events happening that just come by conveniently but things like that happen in real life too and I never had the feeling like ‘Oh right, what would they do if this had not happened at all’ or ‘Really, I so expected that’. I guess generally you can get a rough idea of the ending of a book and Six of Crows was no exception to that rule yet, in contrast to other books, I did not want the book to end, I wanted to read on and on and on.

The fact that the story is about a heist and tells so much about the people in it makes it a great reading experience. For me the book could be a standalone as well because sure, I can hear about the characters and their stories a lot more, but I also felt that the insights we got in their lives was well rounded, even with the ending we got. There are only very few books I can think of that were planned to be more than just one book and get you excited for more yet they could have worked on its own and I think that is a truly remarkable achievement.