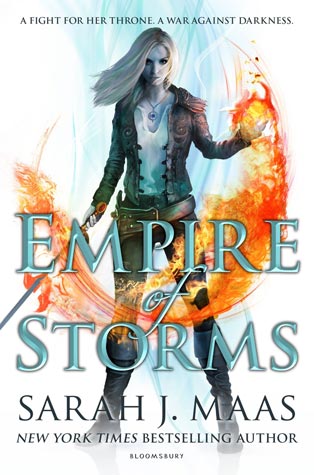 After defeating the king of Adarlan, Aelin can finally go back home to Terrasen, bring her people together, and find an army to fight against Erawan. Even with the throne as her birth right, she has to convince the lords and generals that she is the rightful ruler of Terrasen. Only, some are not so supportive of her so she and her court set out to get an army together that could eventually have a chance.

On their journey, Aelin also gets more and more information from Elena about how to banish the Dark King from this world. Fighting with her, apart from Rowan, Aedion and Lysandra, is Dorian, after he had to flee his city following an attack by the witches. Together they travel through the empire to find allies for their cause while some of them come from unlikely places.

With their attention on the dark forces from Morath, another enemy is gaining on the group and she is not willing to lose. It’s up to Aelin to use all the power she has to stand a chance against either of them.

This review contains spoilers because there is no other way for me to make my opinion valid. And this is an unpopular opinion…

Let’s start with the things I liked about the book: the overall idea of the story.

What I did not like: Everything else. Yes, I did not find anything else working for me although some things only went bad after half of the book or so. There is so much I actually kind of hated, that I don’t really know where to start.

So maybe I rant about the characters first as this is destroying most of the book for me.

Aelin. This person is probably one of the characters I hate the most in any book I ever read. I like heroines and strong female characters that are not without their faults and maybe she was that in the first 2½ books for me but now it changed finally completely. She is just so full of herself and thinks she is the most beautiful, most amazing, most intelligent, most powerful, and cleverest person to ever walk the earth. And on top of that, she is the queen of Terrasen which apparently makes her believe that she and her opinion is more important than anybody else’s. And to make it even worse, her court is not even thinking about challenging her because she is the queen who was promised or because she is the heir of fire or because she lost her kingdom when she was young or because she had to endure so many horrible things. Just pick one, the other characters do the same. And then, when somebody is actually not agreeing with the almighty Aelin, she is reacting in the most despicable ways possible.

I don’t know why it is a good character trait of a queen to just threaten people when they don’t act or react the way she wants them to. Or maybe she just schemes behind their backs because that’s how you want to rule. Just because you can wield fire does not mean that only her way is the right way. I can maybe say it with the words of another person later on in the books.

“People other than you can solve things, you know.”

But sadly, this is not all that is totally annoying me about her, she also is the master of schemes and plots and she does not deem it important to tell other people about it, even if they are her lover or her cousin who was looking for her for 10 years or another one of the close companions.

Unfortunately enough, there is no other character that I like either. They might start out ok for me when they are introduced but they all are making decisions that make me shake my head even though I could live with some of them for a good amount of time.

For example Rowan, who only seems to be the love interest of Aelin as all he does is wanting to kiss her, have sex with her, touch her or get angry at the men that look at her. And his ear lobe fetish is really being overused throughout the whole book. Aedion is always agreeing with Her Majesty, Lysandra could be cool but her shapeshifter abilities are way to poorly written for me (see more later). Dorian is degraded to be a worthless side character, Manon starts out to be fierce but it only becoming the love interest of another character, Elide is somewhat bland in my eyes, Lorcan has been ruthless for the last 500 years but looks at his love interest for five minutes and now he only wants be there for her and protect her and kiss her and whatnot.

Fenrys had potential but he ends up on Aelin’s side just because she is so amazing or for whatever reason, because I still don’t know why. And Gavriel has left such a lasting impression that I don’t even know if there is anything I like or dislike about him.

Oh, and Chaol, who I never actually liked before, does not even appear in the story and is only mentioned by name.

But wait, I guess I like one character after all. Meave. Yes, for what she does, at least she still has the same goal and does not become soft and a worshipper of Aelin.

Another thing why I wanted to rip the pages out of the book was because literally every main protagonist is paired up. I mean I guess it makes sense when the only thing this worlds produces is stunningly beautiful people which the reader is reminded of every second page. But seriously, why is everybody falling in love with each other?

I think the ‘love story’ of Elide and Lorcan is just pathetic, I don’t understand why the author feels the need to try to redeem a protagonist, that never cared about how bad and ruthless he was for centuries but when he sees this ‘strong, gorgeous girl’, he falls head over heels for her…

I did not like the other pairings either as there always was a part that disturbed me about the way they became interested in each other or how they acted around each other or how they acted because of their significant other. And I don’t want to even start with the sex scenes, I mean, is this book not declared as Young Adult?! I think detailed descriptions of sex have no place in a book of this category…

But now I will leave the characters be and continue with the plot and the writing. As I said at the very beginning, I think the whole story idea has potential but what the author is doing with it is weak. From the almost 700 pages, not really much is used for plot advancement and if it would have been used for character development I would not complain but I already gave my opinion on that. So I think in the end it was somewhat unavoidable that the author used the deus ex machina device like I have not seen before in any other book. Again, I don’t have an issue with this plot device if it is used occasionally but if this is the only way to make your story work, I feel the plotting was not done well enough.

Like when at the end, an army appears at the exact location where the final action takes place because Aelin has already sent a message a while ago. At least this is the only way it makes sense because the army needs time to get there, although the reader is never told when she did sent it. The problem now is just, that it was not clear to anyone ever during the story, where this place was going to be… This is only one of many moments where through some unexpected happening, the whole story is saved.

But if one can live with this, I feel there are a lot of mistakes in the writing or plot. For example Lysandra’s shapeshifting, which is a cool feature in itself, but throughout the book there are different explanations given for how fast she can shift and how much energy is used in the process. On the one hand, she can’t change her form from small to large animals within a short period of time, but then on other occasions she kind of does it anyway because it’s just what the story needs.

Another example is the marrying thing at the end. Again, Aelin knew the end before everybody else so she married Rowan just in time before the final battle to make him the king of Terrasen and so he could rule in her absence/death. But to make sure nobody notices that is actually gone, Lysandra will change into Aelin’s body and pretend to be the queen. And Lysandra could then produce heirs with Aedion as they would look the part then. If nobody would find out that Aelin is gone, the whole marrying thing is redundant in my eyes. And if you just want to make the characters get married because they love each other, then just do it that way and don’t find some stupid explanation that is not making sense at all.