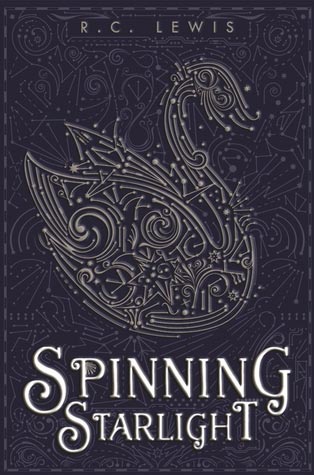 Facing an almost unsolvable task, 16-year-old Liddi Jantzen has to rescue her brothers without saying a word as this trigger their death. After she comes home to find shots being fired, she runs away only to discover an interplanetary conspiracy including her brothers being held captive and a device implanted that will kill them if she says anything.

Not wanting to accept that there is no hope, she travels to another planet but without a decent form of communication her chance to rescue her brothers in time are getting slimmer every day. Although the process is slow, Liddi is able to deduce more and more of how her brothers’ lives and the fate of the planets she knows is interconnected.

With the help of Tiav, a dignitary from the planet she run off to, and almost out of time, she has to come up with a way to save everything and return order to her universe.

There was no other option than to read the book after I read the first chapter at the end of Stiching Snow. I loved the way it started and also the premise of the book, another fairy tale-retelling set in space.

Because I liked Stiching Snow so much, maybe my expectations were a little high but nevertheless I felt really disappointed after only reading a few chapters. After enjoying Liddi in the first chapter, this feeling could not be sustained continuing the story. Even though there were a lot of background information that should make me care, I was not really moved by her story or her parent’s death or her being constantly surrounded by paparazzi. I also did not care about her missing brothers in a way I wished I would.

In general, all the characters in the book could not ignite the spark or sympathy or anything like that so I was concerned about what might happen to them or how they feel. This seems to be mainly because there were so many different protagonists playing a role from so many different alien races which weren’t properly introduced to round up the picture.

This is leading me to the point of the book that made it hard to read sometimes and I found myself having to re-read some passages a few times. The world building is not great in my eyes. Maybe the surroundings are described nicely and I can imagine how the planets look like but the ‘science’ is not explained properly to an extent that it makes sense to me. Liddi’s brothers are trapped in some kind of conduit-interplanetary travel system interaction with some living beings but the explanation of how everything works is way too confusing. I don’t want to say that the system is not well thought trough but when the book is only about 320 pages long and a lot of time is spent with Liddi trying to communicate with others, something has to come short.

Another negative for me is the relationship between Liddi and Tiav. After he initially helped her because she was lost and could not speak, he tries really hard to communicate with her. As writing is not used anymore from where Liddi is from, it is really hard for her to express herself. Even though Tiav writes a computer program which helps her to formulate sentences but the process takes forever for just a short sentences. This though is not what bothers me although we are reminded about every few pages how hard it is and how long it takes to write anything. My problem is that somehow they have such a deep connection that after only a few days working together he looks into her eyes and somehow can tell what she wants to convey. And then obviously after only a few weeks they fall in love even though they hardly know anything about each other, well Liddi knows more about Tiav than the other way around as he can actually speak.

I have read few stories where I am not annoyed with characters that barely know the other person, then fall in love, kiss, and hold hands and him/her choses the new love over the family or only thing he/she knew for the whole life.

In the end I have to say that the interesting premise was sadly only that for me and the execution and building of the story could not move me. Still I think that if you have no problem with the relationship between Liddi and Tiav, this book can be an entertaining read.