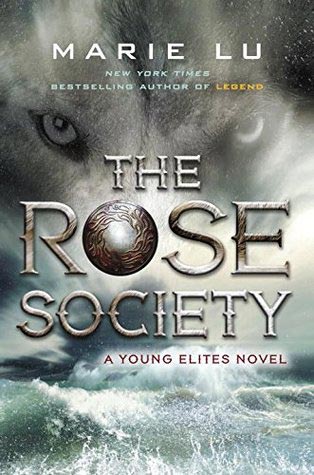 Being cast out by the Daggers after the disaster in the arena, Adelina is recruiting her own Elites to take revenge on all who betrayed her. With her sister by her side, Adelina searches for other Elites and convince them of her cause so they will join her in fighting against the queen, the Inquisition and her old allies. Know widely known as the White Wolf, she founds the Rose Society and within a short amount of time, they become more than just a rumour.

Trying to make her plans come true, Adelina is growing stronger and stronger and with that, her thoughts become darker and darker. Not trusting her new friends completely, she slowly loses control over her power which is purely fed by hate and fear. Getting closer to her goals, the fight with the Inquisition and all other enemies, the greatest danger might be her own mind. Can she find goodness in herself and not let the power of her dark side take over completely?

I definitely like this book better than the first one even though it got only really good in the end for me. Although I sometime was not necessarily gripped and glued to the pages, I think it was still easier to read through than the Young Elites.

A clear improvement in this sequel was the character development. I think that all the main characters got more and more layers to their personality, especially Adelina. The path she is going down is so well written and I enjoyed it so much that the main protagonist is not a heroin but she in some way is truly evil. I love how Marie Lu is writing her continuous fall and how the reader is experiencing every step of the way into the darkness in Adelina’s own imagination and mind. That she ends this way is just so realistic after everything that happened and because she is gradually become more and more ruthless and determined of her cause. It is also great to see that every other character brings out a different side in her which makes her such a well-rounded character and this is not something that is done in other books to nearly this extent.

Apart from that, I still find Teren to be my favourite character although the reader does not really get to hear his side and he actually is a somewhat horrible person. But Adelina is on the way to be one as well, so… It’s just something that remains from the first book because I was way more interested in Teren’s story then the others.

Another thing that definitely improved for me was the pace of the book. When I sometimes did not know what the purpose of the story in The Young Elites was, I feel that there is a clear path in this book. Although at times the plot was progressing rather slowly and I was desperate to get to the real action but in the end, there was a lot of action that made up for those pages. I also really liked the idea of the story as a whole and I felt more attachment to the characters and the world.

I still think that the world building is not what stands out in the book and I am again sometimes left without an idea how the surroundings look like but as the character were developed so nicely, I  did not pay attention to this fact quite as much as before.

I think in the end, this absolutely is an improvement over the first book for me as it further improves on the good aspects and gets other issues right or at least makes them convincing. And, I really don’t have a good idea of how this series is going to resolve even though I have some clue of at least one thing that will probably be further developed. I think this is a rare circumstance as most of the time, there is ultimately only one way how a series or book will wrap up and it this pretty clear at one point in the story.

I am glad that after my initial disappointment for The Young Elites, this book could convince me otherwise.

Adelina, survivor of the blood fever, has to fight for her life again after running away from her home and being hunted by the Inquisition Axis. The plague has marked her as a malfetto with silver hair, her left eye missing, and special powers that make the Young Elites notice her.

The Dagger society, a group of Young Elites, and Adelina soon realise that her powers are dark and have the potential to be the most advanced yet. She struggles to keep her dark thoughts buried deep inside her but at the same time, they make her powerful so she can take revenge on all the people that wronged her.

The Daggers and their leader Enzo Valenciano are determined to free the nation from the king and queen and their attempts to kill all malfettos with the help of Adelina. She tries to trust Enzo and his group but she is plagued by doubts and when she meets Teren Santoro, the leader of the Inquisition Axis, she must decide which side she is on as he has a secret that has the potential to ruin everything.

It’s hard to write this review as I am really torn about how I feel. I can‘t really describe what it is that makes me feel this way. I heard so many good things about the book that I maybe went in with too many expectations.

I think first of all, from the synopsis on the book I was somehow expecting something different, a more badass main character Adelina and a real secret of Teren that the reader does not know until very late in the book.

I thought Adelina would be ruthless and trying to get revenge no matter the cost but she is a character that struggles with her dark side and does not want it to take the better of her but because it enables her to fight, she is using that power. I don’t necessarily have a problem with this kind of character but I just could not see the ‘desire to destroy all who dare to cross her’ which I was promised… Aside from that, I really think it makes sense that she is the way she is, wanting to take revenge but also just be free and safe from people like her father and the Inquisition.

My problem with Teren’s secret is that it not really is a secret because the reader is informed about it very early on in the book, it’s just that other characters in the story don’t know about it. This is not an issue with the character itself but more with the writing and how the story is developed during the book. Nevertheless, Teren was kind of the only character I wanted to know more about, his background and why he became the way he is now.

This was exactly the opposite for Enzo although he is quite mysterious with the way he is acting and because we don’t really know what he is doing when he is away from the Dagger’s hideout. But still I could not bring myself to be thoroughly interested in his character. I also felt the connection between him and Adelina to be developing too fast as they don’t really talk a lot and it feels fuelled only by the mystery between them. I have my aversions with insta-love and as they don’t spent a lot of time together, this comes awfully close to it.

Apart from the protagonists, I had a problem with the world building, mainly because of the writing style I guess. I It is very straight forward and to the point which isn’t bad at all but somehow it took the imagination of how the world looks like away. It seems very Italian with the names, the buildings and the things that happen in the world, at least to the extent that the reader gets to know.

Although there is quite a lot I found not to my liking, I still overall liked the book, which is a little weird. I did not read it in one sitting and had to take brakes while reading but due to the writing style I made it through very quickly and it did not feel time consuming. I am interested how Adelina’s story continues and the epilogue left me rather intrigued by what could happen. I am hoping that the Rose Society can convince me more but I don’t want to go into it with too many expectations again to not be disappointed again.