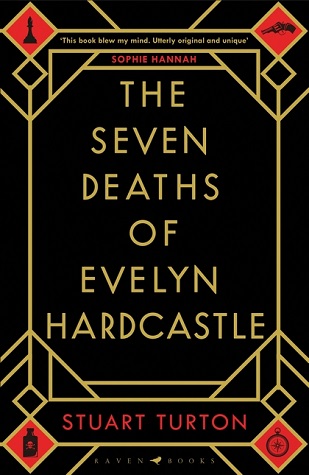 How do you stop a murder that’s already happened?

At a gala party thrown by her parents, Evelyn Hardcastle will be killed--again. She's been murdered hundreds of times, and each day, Aiden Bishop is too late to save her. Doomed to repeat the same day over and over, Aiden's only escape is to solve Evelyn Hardcastle's murder and conquer the shadows of an enemy he struggles to even comprehend - but nothing and no one are quite what they seem.

While trying to prevent the murder of Evelyn, he also discovers the dark pasts and secrets of the people that are present at the dinner party where the murder takes place. With each day going by that Aiden can’t prevent the murder, more and more is revealed and just when he is about to solve the mystery things take an unexpected turn nobody was expecting.

This book was basically my first mystery/crime book and overall I really enjoyed it.

I think it started a bit slow for my taste and it took my a while to get invested in the book. Especially because I was a little confused at the beginning as I did not know what to make of the way the book started. I think in a way I did not really like the first character we get to meet in the book because he is so bland. In the later stages of the book though it makes sense yet it did make it a little bit harder for me at the start.

After the first day is over though and the second character gets introduced I found myself to be quite invested as the plot became more and more intricate and complex.

From all the protagonists in the book, I think I liked the character on day six the most, personality wise, but before I think there were some really interesting characters in the days before as they were an essential part in building up the suspense.

Also some of the side characters made it a lot of fun to read as they were kind of scary and I really got the ‘I have to look over my shoulder’-feeling while reading. With those figures, it was hard to put the book away because you never knew when they’d show up and mess with the main characters.

A vital point in the book is the writing as each character is distinguishable from the others in the way he speaks, thinks and acts and the writing actually transports that really well.

This would actually be an easy favourite but unfortunately I did not enjoy the ending that much. With the many little threads that played a part in the murder of Evelyn Hardcastle, and how everything was entwined it was impossible for me to guess the killer (although I rather enjoy it more to not try to guess what happens in books if it’s not completely obvious) even if I wanted to. Though this was really well done, the ending was a little to unspectacular. After the build-up suspense I expected a little more.

Nevertheless I think this is a very good read and I want to recognise the map in the front and back, it adds so much to the mood of the book, as well as the cover and it’s colours.