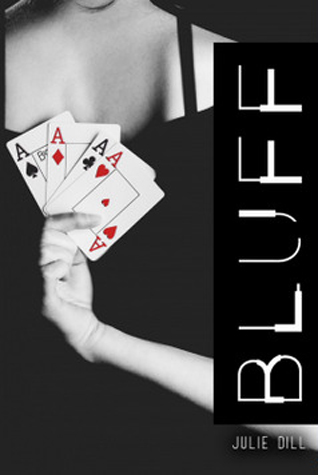 Chelsea’s life is not easy. Being alone with her dad, they have a hard time paying the bills yet it still isn’t enough and Chelsea starts gambling. After her mother left, it’s only Chelsea and her dad and as life somehow seems to get more expensive with Chelsea’s cheering and food and electricity, Chelsea is desperate to find a way out of the misery.

Because she has been playing poker with her dad when she grew up she is sure this is the way to make some extra money. The problem though is her age. As she is only seventeen, she is not yet legally allowed to play in a casino so she has to construct lie after lie to not be exposed. She also hides her late night activities from her father and friends at school.

While it gets harder and harder to keep up her story, she also starts to fall for one of the security guys at the casino. Still sure she got everything under control it might just be a matter of time before everything starts to go south.

I received this book from NetGalley in exchange for an honest review.

I though the synopsis sounded really interesting not only dealing with gambling addiction but also with a character that is under age at the same time. I have to admit that I was really disappointed by the book and the story. I don’t intend to offend anyone with my review, I can only say how realistically executed I found the book.

First of all, I think the premise was set quite nicely, the fact that Chelsea is so desperate to get her hands on money as her father is somehow unable to take care of them. So she tries her luck at the poker table of the local casino. I just don’t see why she is not just getting a job as she apparently has an enormous amount of time which she can spend gambling instead. I think the author could have found at least one convincing reason for her not to take this action.

To be honest though, her life situation being broke and not wanting to go to her rich friends for money because she would be ashamed was about the only thing I found in any way convincing about the book.

I was not able to feel for Chelsea whatsoever, I was mostly annoyed by her decisions although I know that addicted gambles don’t necessarily have rational thoughts. I mean on one occasion she wins about $1200 and the first thing she does is buy designer shoes for around $150 and clothes. I felt betrayed in this situation because normally all Chelsea could thing about was paying the bills and she could as well have bought shoes for maybe only $40. In addition to that, her friends at school asked her about the new expensive shoes and she found a stupid excuse that nobody actually questioned although everybody knows about her financial situation?!

With the rest of the money, one thing she also did was fill up her tank and then she fantasised how far she will get with all this gas but only a couple days later she was out of gas again. I mean, where is she driving the whole time? The only thing we get told is her driving to school and to the casino. I was really annoyed by that.

The whole thing is getting even more disturbing when she tells her best friend that she was gambling for some extra money. So somebody knows about her having been at the casino multiple times and she does not really try a lot to help her, especially when Chelsea is separating herself from everybody else even more.

These were only a few things that I could not get into at all concerning the main protagonist. Apart from that, the ‘supporting cast’ of the story was one-dimensional and unlikable in my eyes. Her love interest was cute and only had eyes for her after he saw her for the first time (cliché) and I could not help myself but wait for something bad or shady he does. I feel like if this character would have been left out, there would definitely have been more story left to make Chelsea’s story more rounded.

I think that the issue brought up by the book is a really important one to make but there was too much that was not convincing in my view. And I have to say that the ending almost left me with an even bigger shake of the head but the last page was actually the most realistic thing about the book.

All in all, I had to force myself to read through the book. There are actually a lot more issues in this read for me than I wrote about. My ultimate critique about the book is the fact that in order to raise the problem of a gambling addiction, the author attempted to put too much into the story so that the realism of the situation was lost on the way.