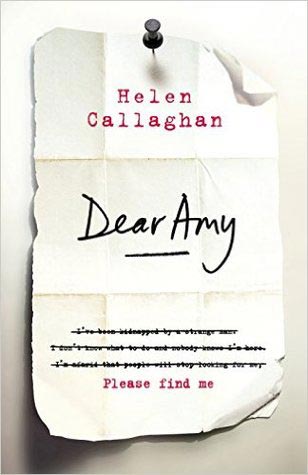 Margot Lewis is writing an advice column for a local newspaper. One day she receives a letter from a girl that has been missing for years. The letters are signed with the name Bethan Avery. The mysterious thing, a few weeks before the first letter, a girl from St Hilda’s Academy, where Margot works as a teacher, went missing. The police investigated for some time but could not find any evidence of an abduction and stopped the search. A theory concerning Katie Browne is that she ran off on her own.

Because of missing Katie, Margot is not sure what to do with the letters and eventually goes to the police but they only laugh at her. They say that this is just a fake but when other letters arrive, Margot starts to research Bethan’s case on her own and she keeps telling the police. After some time, she gets an email from Martin Forrester, a criminologist who is interested in the new evidence and wants to analyse the handwriting of the letters and compare them to Bethan’s.

It is confirmed that the letters are most likely written from Bethan and because of that, Margot is urged by Mr Forrester and the police to appear on TV in a reconstruction of the old case to appeal to Bethan to tell the officials where she is. With all of that, Margot’s life gets more and more stressful, being in the process of divorcing her husband, working on her column and teaching in school.

As they try to find out where Bethan is, the life of Katie hangs in the balance as it gets more and more obvious that the disappearance of her has something to do with the case of Bethan Avery all those years ago.

I received this ARC from NetGalley for an honest review. This is not normally the genre I read but the book generally left a positive impression. I liked the read for the most part although the ending was more and more predictable as the story progressed.

A really strong characteristic of the book are the detailed descriptions of Margot’s life. I like how her mental state is made very clear, especially by the choice of words. There is a full inside into her life and what is going on with her. Also the surroundings and other people are described extensively and with that the reactions that Margot has because of everything that she experiences. Sometimes this makes it a little hard to read and it feels like it is dragging on but generally I think this mirrors the atmosphere of the book and the plot.

I also liked the way that the farther the story goes, the more Margot’s issues and problems are shown. For me this rounds of the picture of a real person as everyone probably has the one or other difficulty to master in life.

The way the story is told is also nice as one perspective is Margot’s and the other ones is from the newly missing girl Katie. This depicts how the police and the people in Katie’s surroundings see her disappearance and what happens to her in the meantime. Both characters are written from the first person point of view so we only get to read how those two perceive other people and their situation which adds an aspect of mystery to the story.

On the other hand, at some point it was quite obvious how the story would end. This made me lose the interest a little and so the last fourth of the book dragged on for quite some time. In general I was not very eager to get to the end of the story even though I liked the style for the most part, it just did not capture me.

Overall that makes me have mixed feelings as there were so many things right that it is sad I could not feel the excitement to just read and read and read.It