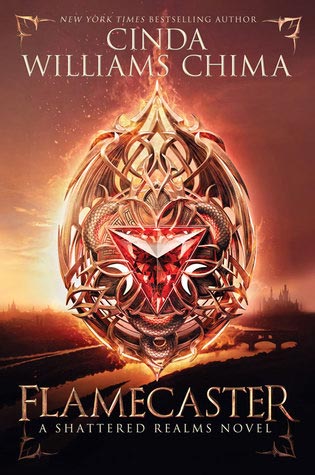 Ash sets out on a journey on which he wants to take revenge of the bad things that happened to his home the people he loves by the king of Arden. As the son of the queen of the Fells, Adrian sul’Han feels he has the obligation to help his people regain their freedom.

After a series of murder, he trains to be a healer at the academy at Oden’s Ford when he finally sees a chance to get close to the king of Arden and kill him so the suffering can end. Plotting his move, he discovers that the king has plans on his own which include a girl with a magemark, Jenna.

As Jenna is as unwilling to part of the plans of the king, Ash is full of hatred for the man and so they have to work together to escape and maybe turn the tides in the war between Arden and the Fells.

As this is the companion series to the ‘Seven Realms’ series, this was a no brainer for me as I devoured the original series within less than one week. And this book did not disappoint as well. I actually wished I would not have picked it up before the series was over, just like with the ‘Seven Realms’ because I just NEED to know how everything turns out!

I just love the world that the author build and the characters are all just so easy to fall in love with. I could even do this – to some extend – with the bad ones. And she makes me care for the protagonists in a way that I really truly care what happens to them, I have to spot reading for a while after one of those events just because I have to get over the fact that I cannot hear their voice or story anymore.

Aside from that, which was just generally about the – in my eyes – greatness of the author, I find it really hard to write something about a book that I have not one single think I did not like about. It’s always the things you don’t like that make it easy to write anything really productive, yet I will try my very best.

What I liked about Ash is that he, in some ways, is still a little naïve in his actions and believes, I mean he is still quite young. But he can also take the lead and make difficult decisions. He just seems as such well rounded character, which also applies to Jenna, the other main protagonist of the story. Hiding who she is since a very young age, she is acutely aware that she has to be extra careful all the time and mistakes could potentially be deadly. But still, she is fighting against those that are responsible everything and is not willing to give in – she is determined to find a way to make it right. But also all the side characters that appear are real people and not just having a role because it is convenient for the story. And again, some of the bad people seem to not be so bad at all but just because the somehow have to be or were raised under certain circumstances.

I also like the world and that the story is centring on a different part of the world than in the ‘Seven Realms’ series and there is more to explore about the different places the story takes place in. And it’s so well described, my mind just expanded the map I already had of the world in my head. And it all fit so well together, the original picture was somewhat getting completed further and I hope for so much more to explore in the next books.

In the end, there is another thing I found that made me smile and overall content and rounded up everything I already thought about this piece of writing. It’s an unspectacular quote. It’s not poetic or anything but it is one of the reasons I like the character(s) so much:

Finishing, it will always be a mystery even for myself why it took my so long to read it, I mean it was published early this year and it took me till late summer?!