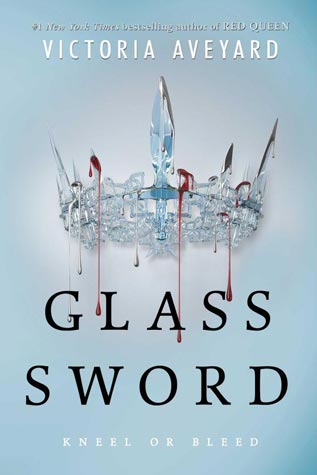 After escaping her execution, Mare is on the run with the Scarlet Guard. With her, the silver prince Cal who has nowhere else to go after being manipulated into killing his father, the king. Being unwanted at the headquarter of the Scarlet Guard because of their abilities, Mare has to find a way how she can save the Reds with Silver abilities on Julian’s list. Together with Farley, Shade, Kilorn and Cal she runs away to rescue them before the new king, Maven, gets to them.

On their mission, they come across people with astonishing abilities, some need more convincing than others to join their cause in destroying the rule of the Silvers. They get ambushed and have to fight their way out of dire situations, sometimes beating Maven, sometimes needing too much time and they only find corpses or no bodies at all.

Coming across the path of a girl who just escaped from a prison where the king and his evil mother Elara keep Reds and Silvers alike, Mare and her crew to everything to rescue them and set an example that the king is not invincible. On this critical mission, some lives are lost but others are won back and the events will pave the way for decisions that can never be taken back.

I have to say that the first book was already only OK, but as I have a hard time leaving things unfinished, I picked up the second book. I was not expecting too much because I did not like the way in which the first book was heading in the end. But still I ended up being slightly disappointed.

I think, this book has a lot good qualities as I like the writing style – written from a third person point of view – and that the characters are developed and we get to see all kinds of facets of the protagonists. And, what I found to be very important for me, the story is quite long so you have enough time to enjoy and don’t feel you just started a few minutes ago.

But – and I fear there is a big BUT for me – there are way more aspects I cannot get into.

But there are friends I would trade, lives I would forsake, for my own victories.

Even if that is part of the character development, I would rather do without a sentence like that. It just holds the wrong message for me, especially when it comes from the supposed hero of the story. Sure, she is not perfect, but still…

I know that I will read the third book because I hope to be surprised, positively. And the covers are just about the most gorgeous ones I have on my bookshelf. And on every page, the Fleur de Lys appears, nothing more left to say…