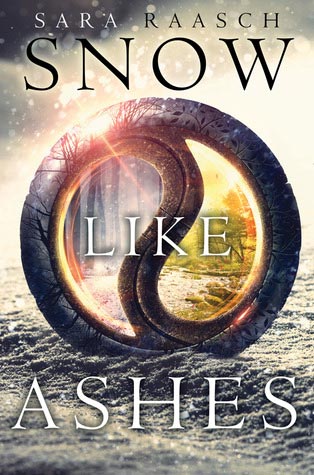 Meira and the other escaped Winterians are on the run from the cruel and vicious Spring king for 16 years trying to get their home back.  She is part of the group that was able to escape when Spring attacked the Winterian capital Jannuari and their queen Hannah was killed. Meira was just a baby, just like the future king and son of Hannah, Mather. They grew up together learning how to fight and survive and now Meira does not know what to do with her feelings for her future king.

Their leader of their little group, whom Meira simply calls Sir, a former general of the army, leads them and tries to get the locket halves back that contained the magic of the queen. The problem, king Angra always moves the parts around so they last free Winterians have a hard time getting it back.

Getting back the locket is the only hope they have in finding allies to fight against Spring and free the thousands of slaves in the work camps all over the brutal kingdom.

When the group finally has some success and meets the king of Cordell, another kingdom far to the north of their homeland, he agrees to help them but the price for this assistance is high and there is no guarantee that everything will work out in their favour.

This book was waiting on my shelf for quite some time and after hearing so many good things, I wanted to finally make up my own mind.

I can understand that you can get totally lost in the world as everything is so beautifully described and the surroundings are really almost coming to live around you. This is always nice because it shows that a lot of thought have been put into the creation of a new fantasy world. And a new world it is. The idea of kingdoms named after the seasons and the conditions in them are like the name is interesting. Also that there are other kingdoms as well that they are all connected to each other through history is nice.

I think though that the story is not something never seen before and that’s exactly where my problem lies. Some things just don’t add up and when comparing them to other magic worlds I had a hard time being too enthusiastic about the book. The very reason for Meir and her group to be able to find the first half of the locket was not making sense to me. Why would the evil king not just lock away the medallion to keep the Winterians form stealing it? It can’t be that hard to protect it against less than 10 people and if they are coming that it should be easy to kill them… I know that the story somehow has to get going but when a book starts that way, I somehow have a hard time getting into it. No matter how fabulous the rest is, I cannot forget the beginning.

And yes, the rest was really good, the characters have debt, they get more and more layers the farther the story progresses even though we only get to see them from Meiras point of view. The only thing that bothers me a little is the fact that they are mostly too black and white.

I like though that, apart from the initial flaw, the history of the kingdoms and magic is getting explained very well and in a nice way as well. It all makes sense which makes it even harder to forgive the not logical start of the book.

Most of the plot twists were quite clear but nevertheless the writing style made up for that and I truly liked Meira because she seems like a proper character to me. Meaning, she is very confident that she can do things and then they don’t necessarily turn out the way she expected. And she has a hard time overcoming some of those following insecurities afterwards but somehow can muster the strength to try again.

The ending left a good foundation for the continuation of the story yet I have to say that I don’t really feel the need to pick up the next book straight away. But if you are looking for a well-developed and fascinatingly detailed fantasy world, this is a book to love (if you don’t mind little flaws).

Coming to an end, I have to say that I sometimes just looked at the cover for a few minutes before reading because it captures the essence of the book in a tremendous way. And it is wonderful.