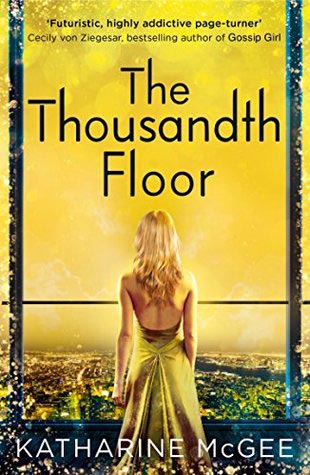 Manhattan 2118. Life will never be the same for 5 teenagers from the tower, a thousand-story building, when their paths cross unexpectedly. The floor you are living on is reflecting the wealth of your family and while life in the top floors seems carefree, people on the lower floors struggle to make a living.

Living from pay check to pay check is Rylin Myers. Being responsible for her little sister after their mother’s death, she gets the opportunity to work for Cord Anderton, she reluctantly accepts. Realising that payment is better when cleaning his apartment, she takes his offer but soon she discovers feelings for Cord she was never expecting.

Leda Cole, normally enjoying the riches and glamour of the upper floors, comes back from the summer holidays which consisted of rehab for her. Nobody of her friends knows that she has been to rehab and especially not the reason for her needing it. She is desperate for nobody to find out and cannot wait to see the person again that got her into this mess.

Watt Bakradi and his family are always in the need for money. That’s also the reason why he is doing hacking jobs – easy when you are a technical genius – next to school to support his mum and dad. When he one day gets approached by one of the rich to spy on somebody, he meets a girl and from then on, everything changes.

Eris Dodd-Radson is living a perfectly happy up tower life until one day it crumbles to pieces and she has to move to the 103rd floor and she gets even more shocking news.

Avery Fuller – genetically designed for perfection – is living the perfect life for those on the outside. Her apartment is the one on the 1000th floor, she is beautiful and has everything one could dream of but on the inside, she is lonely, missing the one person she is forbidden to love.

I received a copy from NetGalley to review.

There are very little things that I can criticise as for me this book tells an overly well-crafted story with various characters and nice little gadgets and technology.

I did like the world building although sometimes it lacked a little detail but in general, the reader is left with enough information about the surroundings and landscape. I liked that due to the protagonists different living situations the details are revealed over time and through various eyes. Sometimes it was very easy to imagine the scenes and the emotions coming with it like describing a park or a narrow street or the monorail station.

The most important thing in the book though are the characters and their development while having to deal with all kinds of situations. Throughout the story, my feelings towards the behaviour and character traits of the main protagonists changed many times, sometimes I liked them, I hated them, I was sick of them, I was annoyed by their actions, I felt sorry for them, I was angry at them, I was rooting for them. It felt like in real life, feelings that you might have towards your family, friends, or colleagues.

I think, my favourite character is Watt and it’s not that the others did not put up a fight for the ‘favourite character award’. I can’t really explain why I like him so much but somehow I felt the most emotions when reading about him. Maybe it has something to do with him being into technology and computers yet be a ‘normal’ person (those hobbies do not mean that you are a nerd or freak or whatever others think!).

Apart from his technology, I really much liked the other technology as well though some would be a little for my taste if we would have it now. That’s something that is really great because the majority of the technology is somewhat realistic for humankind to invent and use in the near future. I think all those gadgets and inventions fit very nicely in the world and they make so many things possible but also show the difference between the people with access to it and those without. I am excited for what the author has in store for the reader in the next book of the series.

Overall, I like that the story just follows the characters up to the point that the reader finally knows how I came to the events from the prologue. Every one of them has a different personality and throughout the book it becomes clear that the outside appearance not necessarily has something to do with the feelings and the character. Every person is unique and has more to it than you initially see. Just like in real life!

It was a great and fun read, can’t wait for the next book!