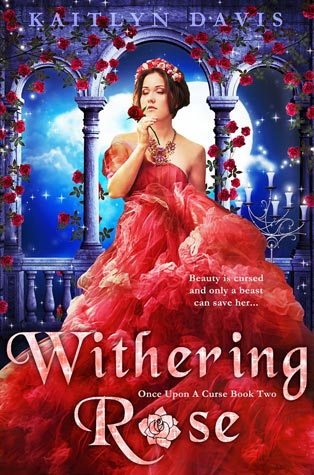 Series: Once Upon a Curse #2

10 years ago, an earthquake made Omorose’s and the human world collide. Humans want to destroy the magic that came with it and that she has. Having to live a lie among humans, she can no longer bare to stay as controlling her magic gets harder and harder every day. Telling her father that she wants to be free, she runs away into the mountains which are protected by magic. It is said that a beast is living there but Omorose hopes that the beast can understand her.

After meeting the king of beasts for the first time, she is scared and has doubts if running away from her father was the right choice. As she spends more time with him though, she starts to see beneath the hard shell and discovers her own bravery. Slowly, more and more secrets about the magic and what it caused are revealed and together they start on a journey to search for a way to end their curses.

In the process, Omorose has to accept that there might not be a way to escape her curse and as the lives of not only her are on the line, she has to make a decision that will rescue the people she cares about. Or is she going to be selfish and use every time she has to find a cure for herself.

I received a copy from NetGalley for an honest review. The first book in the series did not really convince me but I thought I give it another try especially because it is my favourite genre. Maybe because of that I have high expectations and want the books to blow me away.

I actually liked this better than the first although the beginning was a little weak. I did not like the story which causes Omorose to flee. I felt it was rather black and white, she is a loner because she is from another realm and can’t use her magic which starts to get problematic as she feels the urge to do exactly that. This all leaves her with no friends but then one day she gets invited to a party just to be left standing ashamed and on the verge of tears. This was just too predictable and overused for me.

Continuing on, I was a little confused due to the story sometimes as some things were left open. Even though they were explained later on, I had the impression that those storylines were just put into the book with not much though and they were clarified whenever it was convenient. It was not really making sense to me.

Another weak point I see is the fact that Omorose is getting stronger (mentally) and braver when Cole is by her side, touching or kissing her. Even if it is a fairy tale retelling, I would very much appreciate the characters growing as a person because of what they’ve been through not because somebody is standing by their side and holding their hand. I mean we live in the 21st century, if others things get a change than we can at least make the characters a little stronger as well. Going through this transformation because somebody helps you see things differently is fine rather than needing the physical support to be strong.

On the other hand, the author did a great job in describing Omorose’s feelings as she uses a very flowery language to make her point. That for me was one of the best parts of the book. We don’t get the other protagonists inner feelings as it is only narrated from her point of view. Sometimes the precise description is also used for the surroundings which made me feel like I am actually part of the world, not just a bystander that gets all the information told.

Additionally, there were some twists in the story that surprised me positively, they made the story richer and the world more elaborate.

All in all though, I believe that you can enjoy the book much more if you want to read a love story and don’t particularly care about some flaws in the plot.