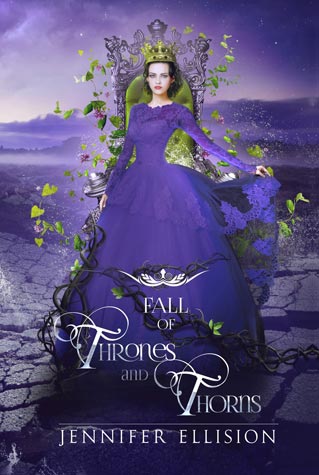 Bree and her friends are finally making it to Nereidium but the island is plagued by mysterious earthquakes which forces the party into action. After revealing herself as the lost queen, Bree now learns what it means to be a water thrower with the help of her people and her aunt.

When the earthquakes on Nereidium get stronger though and the people are in danger, Bree and her friends have no time to lose anymore to defeat the king of Egria and install Caden as the new ruler. Back in Egria, they have to find more allies to end up on the winning side of the fight.

With time running out, they have to give everything to stop the evil king from destroying the rest of the world. Encouraged by this, they are trying their hardest to defeat King Langdon but it might be too late as he has become stronger than ever before.

I received this book for an honest review from NetGalley.

My first reaction after finishing it: Finally, I made it. It took me so long to get through it, I had to force myself to read a bit every now and then. After I did not really enjoy the second book, I was not really hopeful that I would like this one better but I somehow was even more disappointed.

Overall, I had a problem with the story or at least how it was coming together. I feel like way too much happened conveniently in the book before the ending, and then, the final ‘battle’ was so short, I could not believe it. Not that I was overly sad by this point because I just wanted the book to end.

So, let’s start at the beginning and I am sorry, but this will contain spoilers but I have to include them as the things that happened made the book almost unbearable to finish. (If you want to avoid them, just skip the next three paragraphs.)

For me, the beginning was real slow, Bree was starting to do some queenly duties and she was for some reason separated from her friends. It did not make sense to me at all and when everybody else just seems to have an epiphany of what they will do with their life and what their part in ending the tyranny looks like, while nothing was happening. And this does not count as character development for me. It was almost already too much for me.

And then, when finally, something happened with some Shaker on the ‘mainland’, I started to get really mad at the book because the reader is given no worthy reason for all the party – including the new Queen of Neiridium – to return to Egria and fight against this threat. I know that she is the hero of the story but she is the long lost queen, it makes no sense for her to leave her people again and most certainly be in danger of getting injured or killed. This ‘twist’ was in my eye just a lame excuse in the story for her to do exactly what needed to happen so she could end up in a confrontation with king Langdon. I would be fine if there was even a tiny justification for this to happen but there is nothing.

After this extremely disappointing first half I hoped that the rest of the book might be at least all right, I mean it could not get any worse, right?! Ultimately I thought, there will be a final battle with the evil king and there was a lot of book left to make it a grand one but again, the author put a storyline in that I could absolutely not get into. I found it hard to read the very short fight with the king as there is the confrontation with this extremely powerful shaker that takes up a very big time in the narrative. And somehow, this character that appeared out of thin air for the sake of the story, is able to beat the group which has had the time to train, control and fight with their elements. I don’t mind that they lose, maybe he is more powerful, but then, and this made me even angrier, beating the king feels like a walk in the park compared to that. A bunch of trained soldiers and Elementals is not able to win against the Shaker (which did not make any sense to me why they could not while reading the scene) and then almost on her own, Bree is able to defeat the king. Especially, considering that – again without any explanation – the evil ruler was able to get powers on his own while on top of that he has an army at his disposal that should at least be able to make the fight harder.

And then the epilogue, which I don’t even want to start on…

All in all, I found the story to be not really well thought through, the things that happened seemed to be just put together to somehow end up with a confrontation between Bree and the king. Aside from that, I got really annoyed with the characters as well, there was hardly any development and depth to them. Also, the people that travel with Bree the whole time just got paired up with each other in the end. Seriously?!

I basically found nothing that I could enjoy about the book and I am really sad to say this because I am sure the author put a lot of effort in it.

This book was simply put not for me at all, I would have needed the story to be more logical.