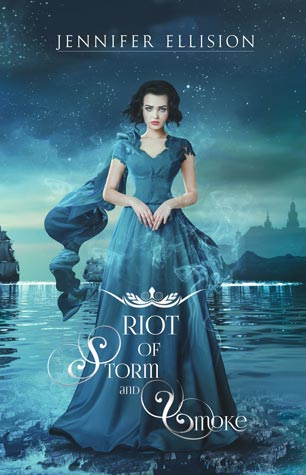 After escaping the king and the castle for now, Breena and her friends now have to make it out of the city alive and get to Nereidium to fight back. With the help of the Underground they try to make it to Clavins to find a ship that will bring them to the Island Kingdom Nereidium.

The journey to the port city is not easy though on its own as they have to face different climates, a lack of water to drink and bandits taking them hostage. As some unfortunate incident in the bandit camp separates Breena from the others she has to find a way to Clavins and back to her friends.

All the while, Prince Caden is trying his best to fight the king in his own way, rallying the nobles and trying to convince them to fight for good side. With the help of an old friend he is trying to get as many troops as possible before the king can defeat them. But as not everything goes as planned, he has to retreat to Clavins where there is a chance to be reunited with the Breena and her group before the journey across the sea.

The book was provided by NetGalley for an honest review.

I was hoping for more after the first book but here I am, disappointed by the outcome.

The flaws that were outweighed by the good things in the first book are really much disturbing me now. I still don’t have any idea of the geography, sometimes Clavins seems to be the country, sometimes it’s the name of the city or I might just get it wrong. There is also some little politics coming up yet there is an utter lack of background information and so I can’t really bring myself to care about it. It gets so hard to read those passages though as there is too much missing for my taste.

I also have this problem with the ‘magic’ again and by now it feels like some kind of magic being in the book as apparently nobody knows anything about it or if they do, they don’t share their knowledge. It might be fine in the beginning of a series but with time I get the feeling that the author can do anything she likes to with the abilities the characters have as anything can be possible with almost no boundaries existing.

On a good note though, there was some character development as Breena has to accept the news she got at the end of book one. I think this was nicely done as the actions of her seem to fit to the state of mind she is in. I also liked that we get inside the head of Caden as there are chapters told from his perspective now as well. Unfortunately, I feel not a single bit for the characters and would not really mind if one would be left behind or died…

I also think that the overall story is still plausible yet somehow although something is constantly happening in the book, there is not really that much overall progress plot wise. Somehow it feels that there is going to be so much in the third book that I am a little afraid that there will be even less world building.

But although there is so much I did not like about the book, it was in the end readable and it was not necessarily that I had to force myself to read it.It