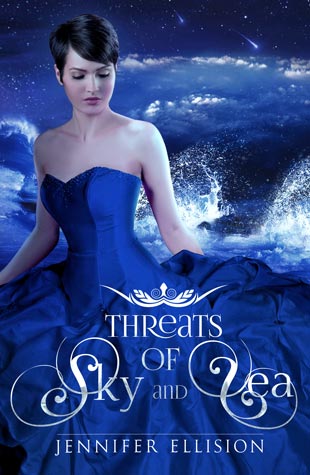 16 year-old Breena Perdit’s life is turned upside down when she encounters three Elementals in the woods who are looking for a traitor to the crown. Although she thinks that she has nothing to do with this affair, she soon has to face the fact that they are searching for her father.

They are both being dragged to the capital and her Da is thrown in prison for treason. Trying to save both their lives, Breena is striking a deal with the king to find out her father’s secrets and why he left his position so many years ago. Contrary to how she hoped this would turn out, she cannot make her dad talk and on top of that has to play her part at court of the evil king.

The longer it takes, the more she finds out about herself and her past and with the help of some new friends she made at court, she might even have a chance to free her father and escape the clutches of the king.

The book was provided by NetGalley for an honest review.

Reading the synopsis I was curious about the story so getting into the story was easy although it started a little weak in my eyes. After some time though, things started to get clear and I liked the overall story and it made sense for the most part although there are many things that we don’t know yet.

I liked the main character as she is thrown into a world she never wanted to be in and never could have imagined to find herself in. It is nice to see her struggle with her new impressions and information she find out as this just makes so much more rounded. She has her flaws and weaknesses and tries her best to overcome those in order to save those she loves and cares about. In the end, although all that, she is determined not to fail and is not afraid to provoke those around her.

I think there is so much more to learn about the other protagonists in the story but I already like one of them in particular because of how she acts and what she says. Yet all the characters who get a little more attention are very different from each other and it is fun to see the interactions between them.

Another good thing about the book is the ‘magic’ as I liked the idea of different people being able to control different elements. I just wish that is was a little more explored, giving more details on how it works or what is possible.

I think this is the general problem for me in this book, things are just being thrown into the world but they are lacking the proper description or background story. I feel like there is almost no world building which seems very important to me when there is an evil king oppresses almost the rest of the world. But what is this world, are there different countries and how do they connect.

And also the magic, even though the principle is as mentioned interesting, it just is not really well explained. I get that as the story is told from Breena’s perspective the reader can only know as much as she does yet I was more than once asking myself ‘how’ and ‘why’.

Regarding the characters, I feel there was not much explanation about how the look which is kind of bad as I cannot picture them so I cannot feel hugely attached to them. The only thing that stuck was the colour of the eyes of two protagonists and the hair colour of one other.

I really hope that the author is doing that in the second book to make it more rounded in my eyes. And I also am quite curious as to how the author is exploring continuing the story with the little plot twist at the end which was quite predictable in my eyes.

Overall I think it was still a good read though and I was able to get through the book relatively fast.